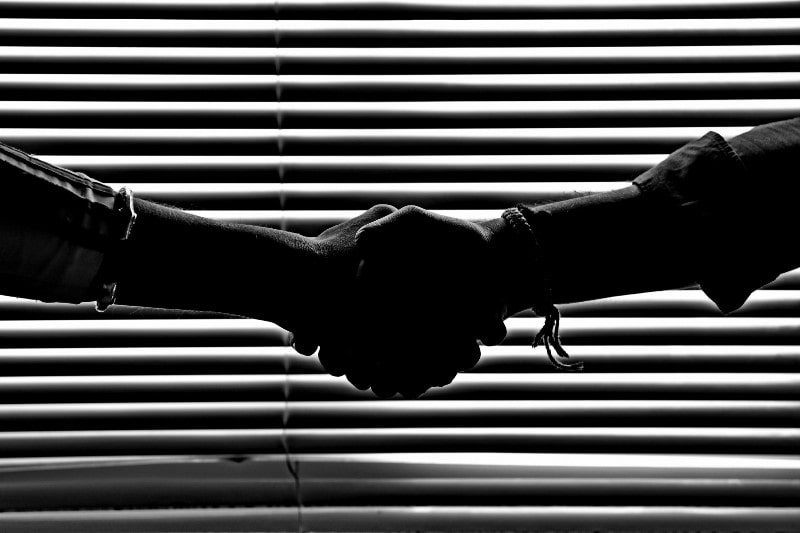 I’ve done hundreds of deals in my life. Only a handful of times have those deals collapsed somehow. However, in the last few weeks it’s happened twice, which has left me reflecting on whether I should be more contract-focused and litigious, or if I should just continue to trust in people’s integrity and accept the occasional problem as a cost of doing business, offset by my organization’s agility.

My company, Embrase, is a startup in many ways. While we’ve been around for a while, many of our newest initiatives, from FWD50 to the Elevator World Tour, are experiments, with a lot of learning and iteration. We need to move fast. So there’s always a tradeoff between the clarity and enforceability of the written word, and the agility and intention of a good handshake.

I’ve learned over the years that the most important clauses in any agreement are trust and integrity. And these can’t be written into any agreement. I often find myself saying, “My word is better than a signed document.” I generally try to avoid contracts with partners and clients, or at most rely on a simple agreement.

For one thing, contracts take precious time, cost money, and are seldom referred to once signed. But there’s another reason to shy away from long contracts: Unless huge sums are at stake, you’ll rarely, if ever, wind up taking one another to court. This is particularly true of Canadian deals.

What matters to me is the understanding between the parties. If the partnership is win-win, then it’s in the interest of both parties to cooperate, so I try to avoid the kind of zero-sum transactions that doom the participants to fighting. Often, a clear email stating the basics (the give-and-get, dates, and financial terms), is sufficient, as long as both parties intend to hold up their ends of the bargain.

Trust is the vital ingredient in any successful business transaction; it’s more important than the terms of the contract. But different kinds of agreements, and different stages of company, should approach relationships differently.

Agreements with sponsors, customers, and clients

Of all the sponsorship deals I’ve done over the years, only twice have I been short-changed. In both cases, these were large organizations (one a large grocer, one a global SaaS company). In both cases, we didn’t have a contract, but we did have a clear verbal agreement supported by email. The most recent agreement changed suddenly when the sponsor unilaterally cut their budget by 30% less than four weeks from the event.

The irony here is that these sponsorship amounts are almost negligible to companies of this size, particularly those who claim they want to support small businesses. Taking these companies to court would be practically impossible, given their in-house legal teams. The downsides are significant, and the only real reason to do so is if they have a history of reneging on spending and capitulating the moment lawyers get involved. For some firms, this is the normal modus operandi, but hopefully you’ve done enough background research to find out if that’s how they operate, and avoided them in the first place.

What’s more, these larger organizations tend to consume a tremendous amount of time in negotiations. They have employees whose full-time job is to negotiate contracts; on the other hand, I have a dozen other things to do. I’ve wasted time negotiating fifty-three page contracts worth tens of thousands of dollars. By contrast, I’ve done three page deals worth hundreds of thousands of dollars in a matter of hours. Companies that like detailed contracts tend to be the ones with whom we have the most confusion. Rather than spelling everything out clearly, a contract often gives the client more things to debate.

On the other hand, many of our last-minute sponsorship deals have been the most productive for all involved, and our ability to move quickly compared to other organizations is a significant competitive advantage.

Startups, angel investing and non-financial partnerships are an entirely different affair. In these cases, it’s the startup that can’t afford a lawsuit; they too don’t have time to waste on contracts. In my early days as a consultant, I offered my services in exchange for equity. In the dozens of deals I did like this, rarely did the organization act without integrity. Here are a couple of examples of when they did:

– When someone else gets involved: In the first case, it wasn’t the entrepreneur that reneged. Their newly added VC investors reviewed the brief agreement we had in place and suggested that the entrepreneur cut me out of the equity-based compensation on a technicality. In the end, the entrepreneur and I negotiated. I was not completely satisfied, but ultimately the Startup had an exit and I still made a return.

– When the entrepreneurs change their minds: More recently, I was offered equity in a startup that didn’t even have a first product. They had an idea and needed my name to give them credibility with other investors. They raised over a million dollars with my help. They needed advice in an industry with which they had no experience, and I negotiated a deal for them that saved them a quarter of a million dollars. I gave them all the support needed for them to get to a first success. Yet despite this, when it came time to make good on their offer to give me equity, they didn’t seem to want to honor it, despite a clear email trail and discussions with their lawyers. This was a total lack of integrity on the entrepreneur’s behalf, rather than the acts of an outsider.

In both these cases with startups, I trusted their word and even their written word, but once they started to show success, they chose to change the rules. Contract or not, angel investors are often at the mercy the entrepreneur’s integrity. So remember that deals for equity where venture financing will be involved mean some unknown third party will have final say on your agreement. In these cases, a standardized document like a SAFE agreement can protect both parties.

Agreements with co-founders and partners

Founding businesses with trusted friends can be superb, or it can kill a friendship. Candid conversations up front about equity and profit sharing, a separation or succession plan, and reinvesting profits in R&D or growth versus paying out dividends, are critical. They don’t have to be written down, but it’s always smart to discuss the divorce before the honeymoon is over.

With large corporations, contracts are important to have, but the more complex they are the more expensive they are to create and negotiate, and often the more issues the other party will have to argue about down the road. I will continue to keep my contracts clear and to the point. If the other party wants to add every clause imaginable, this is a big red flag that there may be problems down the road.

When it comes to doing equity deals with startups, I will make sure to take the time to challenge the entrepreneur’s integrity and trustworthiness, and do my background research. If they, or their future investors, want to squeeze me out once they start to show success, there are plenty of ways for them to do so. But startup entrepreneurs are even less interested in going to court than I am. Lawsuits hold them up from getting more funding. A clear paper trail and good research are the best defense; and besides, startups are higher risk, and this is one of the risks inherent in the industry.

If I ever form a new business partnership, I’ll be sure to do so with people I know and trust completely. Informed context and mutual respect are the most important ingredients.

I’ve never taken anyone to court. But I should not be afraid to “lawyer up” when the value is high enough; when they’re just testing to see if they can get away with it; or when the other party has as much to lose as I do in the process.

However, in the end I continue to firmly believe that my best armour against bad deals is to maintain my faith in the integrity of others. Two bad deals in a week do not outweigh the hundreds of great deals in a lifetime.