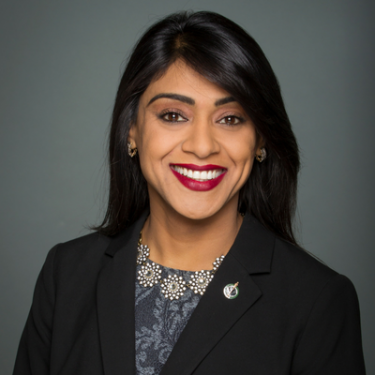 The Honourable Bardish Chagger, Member of Parliament for Waterloo, was appointed Minister of Small Business and Tourism on November 4, 2015 and became Canada’s first female house leader on August 19, 2016. A natural leader and organizer, Ms. Chagger is devoted to inclusion and community building. From assisting with recreational sports for kids to volunteering with seniors, she is committed to strengthening the bonds of the Waterloo community.

In her role with the Kitchener–Waterloo Multicultural Centre, Ms. Chagger has worked to foster diversity within the community, providing opportunities for social and economic engagement. As the former executive assistant to the Honourable Andrew Telegdi, she gained a deep understanding of the issues that are important to residents of Waterloo, including manufacturing, technology and innovation.

Passionate about community involvement, Ms. Chagger has lent her support to many different causes and organizations, including the Rotary Club of Waterloo, Interfaith Grand River and the Workforce Planning Board of Waterloo Wellington Dufferin. She considers herself part of the Charter of Rights and Freedoms generation and has participated in policy conferences on many issues, including the advancement of same-sex marriage rights and the national manufacturing strategy.

The Minister graduated from the University of Waterloo with a Bachelor of Science. In 2012, The Waterloo Region Record recognized her as one of “40 under 40” who would lead the Region of Waterloo into the future.