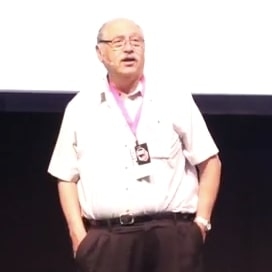 Joseph (Yossi) Vardi was born in Tel Aviv. He studied at the Technion in Haifa, graduating with a B. Sc. in industrial management engineering. He went on to earn an M. Sc in Operations Research and a D. Sc. (his thesis received the Kennedy-Leigh Award).

Vardi began his entrepreneurial career in 1969, at the age of 26, as co-founder and first CEO of TEKEM (Hebrew: טכ » »מ‎) (In Hebrew – abbreviation of «  »Technologia Mitkademet » ». In English: ATL-Advanced Technology Ltd.), one of the first software houses in Israel (later sold to Tadiran and then absorbed into Ness Technologies).[2] In 1970, he was appointed Director General of the Ministry of Development. He served as chairman of Israel Chemicals of Mifaley Tovala, of Harsit and Hol Zach, and a member of the board of Israel Electric Corporation, Dead Sea Works, Dead Sea Bromine, Dead Sea Periclase, Haifa Chemicals, Chemicals and Phosphates, and others. He also chaired the Oil Explorations Concessions Council and Fertilizers Development Council.

He was sent to the U.S. to serve as the Director of the Investment Authority in North America, and Consul For Economic Affairs of the State of Israel in New York. In that capacity he took part in the creation of the Israel-U.S. Binational Industrial Research and Development Foundation (BIRD-F). He acted as an advisor to the Israeli mission to the U.N.

Upon returning to Israel, he served as the first Director General of the Ministry of Energy. Vardi also chaired the Israel National Oil Company, and was a member of the board of Oil Refineries Ltd. During his tenure, Israel discovered and developed oil fields in the Gulf of Suez. Vardi co-founded Alon oil, International Laser Technologies, Granite Hacarmel and other companies. Vardi is a co-holder of a patent on instant messaging on telephones.